I started this blog post on Thursday, January 28th, the anniversary of the space shuttle Challenger’s destruction. This is a time of sad anniversaries for NASA. On January 27th, Apollo 1 exploded during the “plugs out” test, and on February 1st, the Columbia broke up in the atmosphere.

One bit of good news came through Twitter this morning from @NASA, the US has been in space for 52 years since the launch of Explorer 1 in 1958.

I was in eighth grade at Norland Middle School. After lunch, I was walking out of the cafeteria when someone stopped just long enough to tell me that the shuttle blew up. I simply didn’t believe it but proceeded directly to the library; I knew they had a TV there. (These were the days when TVs were scarce in schools.) For maybe 10-20 minutes, I watched with almost no volume, until I had to go to my next class. (I don’t know why they didn’t turn it up so we could hear.) All they showed were two people, over and over again. That certainly didn’t tell me what happened; they just stood there barely doing anything. (Too shocked?) I didn’t even know who the people were. I learned later that they were Christa McAuliffe’s parents.

When I got home, I headed straight for the TV in the living room, which was probably already showing the news. Only then did I finally believe it.

In 1994, during one of my trips to get out of Florida, I went to Washington DC, where I took the picture of the Challenger memorial at Arlington National Cemetery. 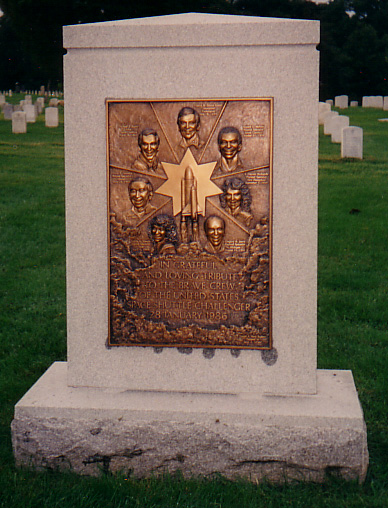 I don’t remember Columbia as clearly. I was simply at home watching TV when it came on the news. I was shocked, but somehow the first tragedy is always harder to take. Also, I was a lot younger for Challenger.

With thanks to Mark Tucker, who came up with this blogging theme on Think Genealogy.