For some reason, I thought an authentic New York egg cream was going to be trickier. Growing up, we made egg creams with chocolate milk and soda — root beer was best but cola or any other brown soda worked. The trick was to make a bit of chocolate milk then pour the soda into the glass, letting it cascade over a spoon. Imagine my surprise when I looked for a recipe for a NY egg cream and found that we had it almost right back then. 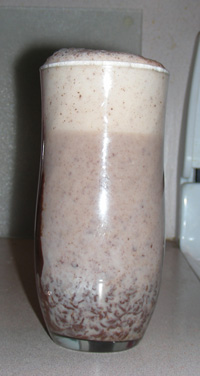 I found several recipe variations, but usually it was milk (whole milk for the best foam action), Fox’s U-Bet chocolate syrup (mentioned by brand in every recipe), and seltzer. I couldn’t find U-bet in Utah, so I settled for the store brand because that’s what I had in my house. I tried a few variations for making the egg cream over the course of a week.

The first had too much milk, but it foamed great.

The second didn’t get the foam action. I think the seltzer was already going flat. It was supposed to be highly carbonated.

The third was the best (pictured). I didn’t even mix the chocolate before taking the picture; I wanted to get a picture of that great head of foam in case it disappeared too quickly.

The fourth, I tried the cascading over the spoon trick, which was a total bust, and I didn’t have enough seltzer to fill the glass.

They all tasted good, but none were quite right, probably because of using the wrong chocolate syrup. I think I’ll stick with using root beer because I know that it will be good no matter what chocolate syrup I have, and I can drink the root beer plain if I want; I just can’t stand plain seltzer.