September 11th has just passed. Everyone already wrote on their blogs about that day. It’s my turn. 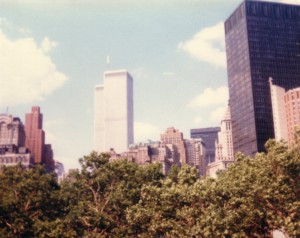 I was living in Nashville, Tennessee, about to head south to visit my cousin Ed in Arlington, Texas. I was between apartments and checking out of a hotel that morning. I didn’t turn on the TV. I checked out and everything seemed normal. I guess the desk clerk didn’t have a clue either.

I Had No Idea

I got into my car to drive across to the other side of Nashville to check my mailbox and the radio DJs were going nuts. It was chaotic how they were talking about planes and bombs, the Twin Towers and the Pentagon. It didn’t make any sense. Apparently the entire country was under attack and things were blowing up everywhere.

Thankfully, at some point during my drive, they deliberately stopped and decided to explain from the beginning what had happened. It was already about 11am or noon, so everything was already over, not that anyone was sure about that at the time. I drove and I listened, shocked.

I don’t think I stopped for my mail but instead drove a bit farther, knowing there was an electronics store not far up the road from the post office. I went inside and walked over to the TV section where a few other people were also standing around and watching. They were playing several videos of the Towers and the Pentagon, showing the people in the streets. I’m not sure they knew what had happened in Pennsylvania yet, or they didn’t know much.

Hearing it on the radio and seeing the video were very different experiences. It’s too difficult to even try to describe it. I just stood there, for possibly an hour, watching in shock.

I wasn’t feeling up to beginning the long drive to Texas, so I called a friend, April, and drove back to her house on the other side of Nashville. She had been sent home from work and we watched as more information unfolded on the TV. Her husband, Chip, is a civil engineer. While they were trying to figure out why the Towers collapsed on TV, he was able to tell us. Eventually, their explanations matched his from earlier in the day.

April was supposed to be in New York that day. She had a work trip planned and was going to stay in the hotel between the Towers, but the trip got cancelled. She was lucky. We had met more than a year earlier while both working at Deloitte & Touche. The D&T office in New York was in Tower 7 and she knew people who worked there. I have a cousin of a cousin who lived in New York and worked for the company but I didn’t know if he worked in that office or somewhere else. We knew they were all fine, as long as they were in their own building. I can’t remember if I tried to contact anyone online that day, avoiding the phones knowing that they were jammed in New York, but I found out soon enough. In the end, I think April told me that one person who worked at D&T was in one of the Towers and didn’t get out.

My Cousin, the Pilot

I spent the night with those friends and headed down to Texas the next day. Ed is a pilot for Delta, so I knew he was all right just because that airline wasn’t involved. He wasn’t even flying that day, thankfully, but was in recurrent training in Atlanta. I offered to pick him up on my way, but he thought that planes would be flying by Friday, when I was due to arrive at his house, and he was right.

Before I left Nashville, I went by my storage unit in search of some photographs; I just wanted to have the memories near. When I was 12, our family went through New York on the way to a long trip through Israel and England. I remember going to the top of the Tower and looking down at the city. I even remember that my father bought me an adult ticket even though I was still young enough for a kid’s ticket, which was odd because he would usually do the opposite. I had a couple pictures of the Towers and I wanted to have them with me. In 1999, I was in New York for genealogy research and looking up relatives, but I didn’t get any new “tourist” pictures. Returning in the first half of 2001, I went out to Ellis Island with my cousin Malky and took a few more pictures of the New York skyline. Both pictures on this blog entry are from the 1985 trip.