Bubby and Zaida, as we called them, were Ida nee Halpert and Abraham Rosenthal. The Yiddish terms for grandparents are actually Bubba and Zeide, but I think me or my brother may have mixed them up when we were young, and they stuck that way. They lived in Cape Coral, on the west coast of Florida.

I remember Bubby used to ride in the back seat of the car; I think she said she was more comfortable there. I can remember bits of what was probably the last time I visited them. At least once, I was put on a plane and sent to visit them alone; my brother did that at least once too. On 16 June 1985, they came to visit us and I asked them about their families — it’s written in my diary. It says that they came to visit, but I remember going to their home and asking, so there may have been two different times when I did that.

Bubby gave me a copy of a family tree that my cousin Don Halpert had drawn up years before. She made some corrections and additions, but I’ve done a lot more to it since then.

Zaida had a boat and liked to take us out fishing. I remember the visit when Bubby taught me to play Pinochle (which I’ve completely forgotten) and let me eat as many Oreos as I wanted. I was sick the next day when we were supposed to go fishing, so we went the day after. I remember catching a lady fish, and Zaida cut it up for bait. One of us caught a catfish. A while later, I thought it was finally dead when it stopped thrashing around, but Zaida said it wasn’t and threw it back in the water to prove it to me. I don’t think we brought any fish back for dinner.

In high school, I had a long trip to school; the school had a deal with the county that we use the Metrorail, but we had to be bussed out of the way to get there. So on during phone call, I apparently complained about the long trip, and also the long pubic bus ride back home when I had to go to work after school and always arrived late. Zaida had been in a car accident recently and bought a new car while his old one was being fixed. He offered it to us. He wouldn’t ship the car, insisting we drive over to pick it up. When we arrived, both my brother and I wanted his newer car, while he preferred his older car, but he didn’t want to hassle with the titles, etc. My brother drove the car home and I rode with him. On the drive home, the thermostat froze, overheating the car. On Christmas. On Alligator Alley. It took us a long time to get it home, repeatedly stopping and letting it cool off, while we all climbed into my parents’ car where we kept the engine and the heater running. I ended up sleeping in my parents’ car for the last part of that trip and I completely missed when we finally drove ahead and called for a tow truck to finish the journey. Sadly, I never got to drive that car to school. Ever. It mostly went to my brother, though I got to use it sometimes. My parents bought me a car the last weekend of my senior year, so I got to drive the last three days in that one. 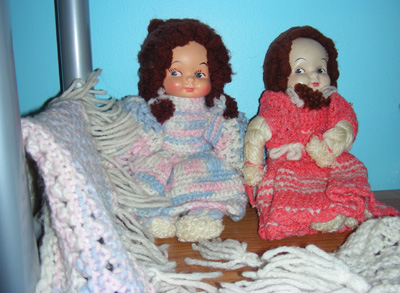 Ida knitted two dolls for me with matching, oversized shawls. I never named them (inanimate objects have to be named immediately or the names don’t “stick”), though I sometimes refer to them as Ida and Mary. The one on the left has two faces — on the back, her eyes are closed.

I also have a jewelry box, given to me in 1973, apparently before we adopted their Yiddish titles, since it’s from “Grandma, grandpa”. It was from Windsor, Ontario, which is where my mother and her brothers grew up.

Both of my mother’s parents died in 1997, which was the year I finally moved out of Florida. Abraham is buried in St. Petersburg, Florida and Ida is up in Windsor, Ontario with more of her family. I have visited both of them since.