For Family Recipe Friday, I made knishes. I’ve had this recipe sitting around for a while since a friend posted it to Facebook. It wasn’t a family recipe, but that topic sounds so much better than Food Friday… 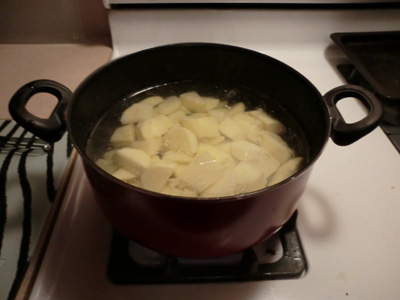 I started by peeling seven potatoes, because two were pretty small. I got to use my big pot to boil them, which almost never gets used in my house, so that was fun by itself. While the potatoes boiled, I chopped the onion. I know how to chop an onion, but I haven’t done enough to master it yet, so I knew I wouldn’t be able to do it quickly in the middle of the recipe.

I just followed along the instructions and it went well. The recipe didn’t say how many knishes it made, and I thought it would be a lot judging by how much food I was working with, but when it said to divide the dough into four parts, I made four really big knishes.

They cooked up well and tasted just how I remember them. The dough especially had just the right flavor and consistency.

I believe 1/25 inch is much thinner than what I did. The potatoes need to be mashed much better just to roll them out thinner. Maybe I’ll try my food processor next time.

Why the recipe says to split the dough into four parts is beyond me. These things were huge and could have made more than four monster sized knishes. Next time I’ll try to make eight. The picture of two of them is on my big dinner plates and not the little dessert ones I usually use. 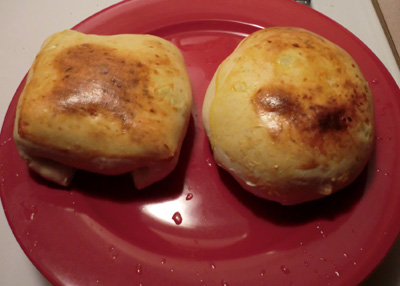 Six and a half potatoes was too much. I put 2 cups into the filling, even though the recipe said 1 1/2 cups, and I still had at least 1/2 cup left. And next time, more potato, less onion in the filling. And the onions need to be diced, or food processored, to make them smaller bits.

The first one was cut round but I ended up folding it square. I figured out how to fold round for the rest. On the inside they looked about right too, except the filling was a little chunky and I think the crust was a bit thick. Can someone who’s had knishes more recently verify the crust thickness for me? It’s been a while.

I didn’t try any of the adjustments that Ben suggested when he shared the recipe, but I’ve listed them and will probably try them the next time.