Since I didn’t embed any pictures into my recaps of RootsTech posts, I’ve decided to post all the good shots together. I have a new camera that fits into my shirt pocket, but it took me a couple days to start really taking some pictures. Still, it’s better than I’ve done at other genealogy conferences, so it’s a start.

With this new camera, I haven’t yet figured out how to do a serious zoom (or even kind of a wimpy zoom) and still get a non-blurry picture, so I took a picture of the audience and the camera from the keynote on the first day. I arrived a little late and stood in the back, clearly. 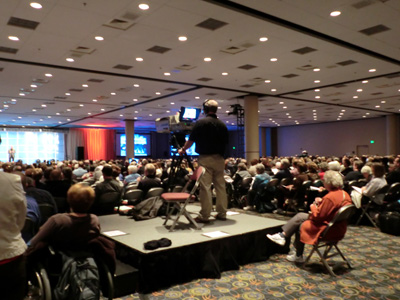 I ran into Rochelle Kaplan, an officer in UJGS, in the Expo Hall the second day. She took a picture of me leaning on the red phone booth that brightsolid brought, but she didn’t get the booth in the picture. She did get all of my ribbons. 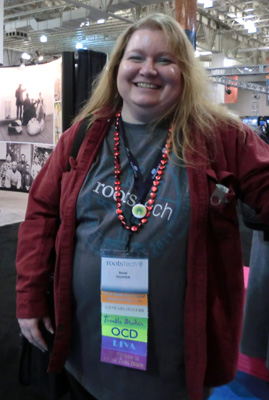 In return, I took a picture of Rochelle Kaplan while we were at the MyHeritage booth. 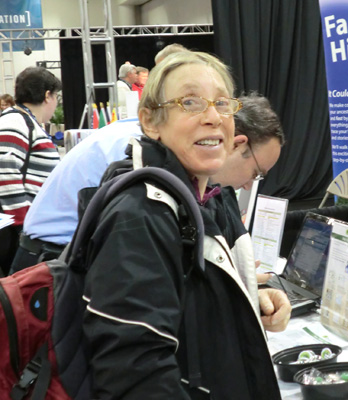 Minutes later, I got a nice photo of Daniel Horowitz and Shelly Dardashti and the MyHeritage booth. 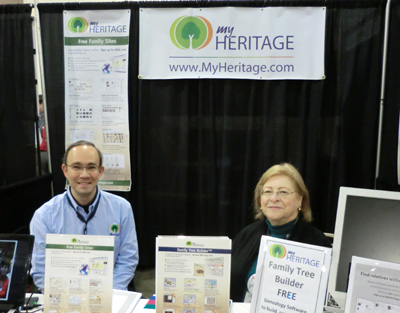 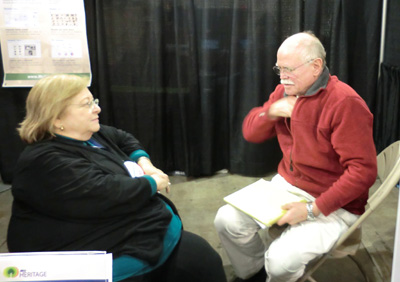 At the showing of Who Do You Think You Are? I caught Amy Coffin and Lisa Alzo tweeting. Judging by the timestamp, it looks like we had a few more minutes before the show started. 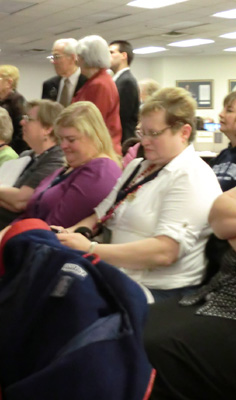 An audience picture at Who Do You Think You Are? night at the FHL. 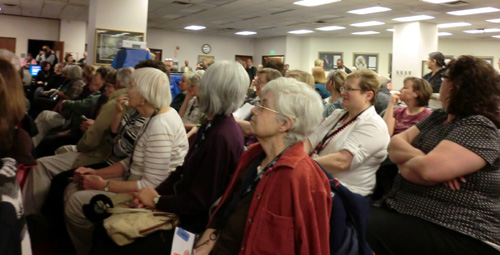 The next day, back in Blogger’s World, I met Kerry Scott (@cluewagon), Missy Corley (@baysideresearch), and Kimberly Powell (@lovegenealogy). 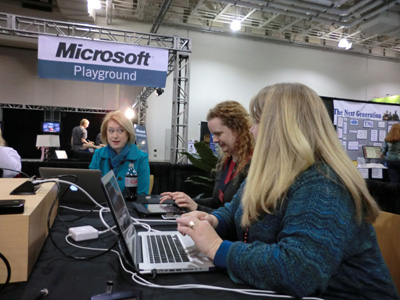 Thomas MacEntee and Amy Coffin were often found at their favorite seats when in Blogger’s World. 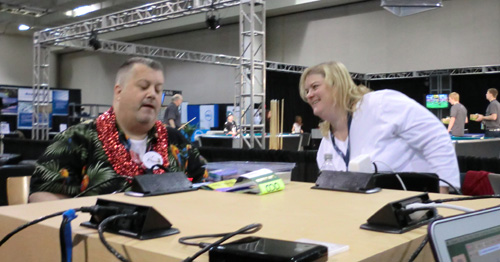 And another shot with Laura Prescott, Kerry Scott, and Missy Corley.
[Thank you to Amy Coffin for identifying Laura.] 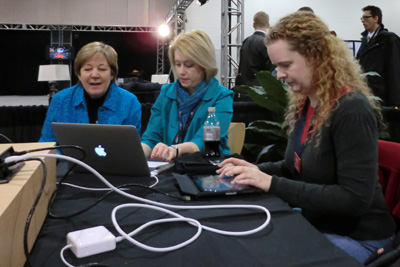 Tami Glatz came to Blogger’s World a few times. I was at her session, so we talked about it for a bit and then I asked for a picture.

I stopped standing at their booth and finally sat down inside, where I got another shot of Daniel Horowitz. (I needed to make sure a got a decent picture of him. He just spoke at his second UJGS meeting and I still didn’t have one.) 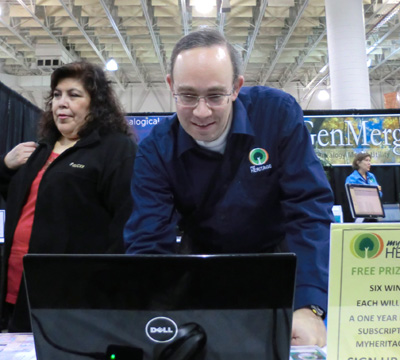 I learned something from Jill Ball (@geniaus), who is from Australia. Apparently, down under, they pronounce the A in genealogy, unlike how it’s sometimes misspelled as geneology around these parts. 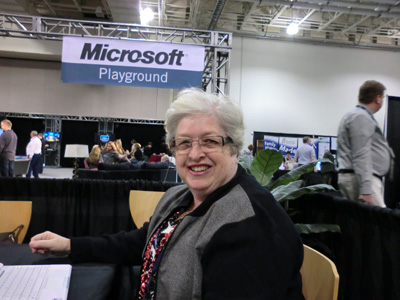 Steve Morse visited Blogger’s World after his DNA presentation. I also captured Shelly Dardashti (@TracingTheTribe) and Lorine McGinnis Schultze (@LorineMS) in this one. I believe that’s Lorine’s husband, Reg, in the hat.
[I have learned from another blog that the backpack was standing in for the @AncestryInsider; no wonder it wouldn’t get out of the way, it was posing!] 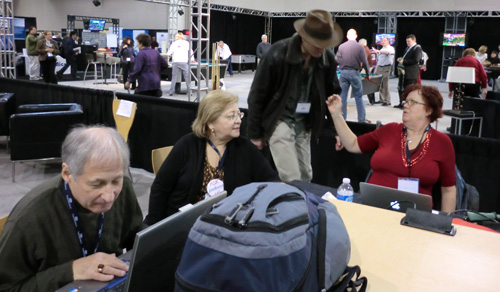 Seems that by the third day, I was finally behaving more like a shutterbug. Moments later, I captured Lorine, Illya D’Addezio (@illyadaddezio), and Jill Ball. 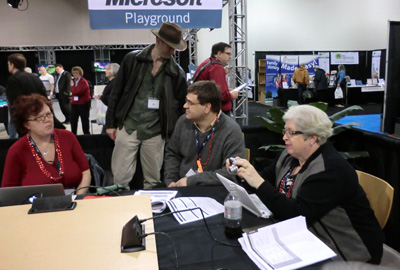 Oh no, I didn’t get a picture of Pat Richley. Someone took one of me and her together, so I hope that shows up somewhere.