Back to Olive Tree Genealogy’s 52 Weeks of Sharing, the topic is childhood pets.

We had a bird that I don’t remember, and my brother had a goldfish, but the family pets were a dog and a duck. 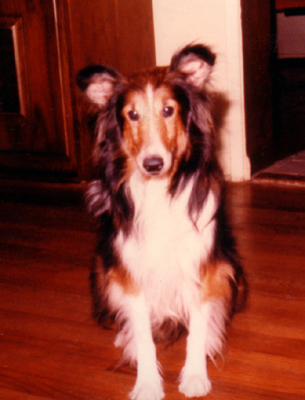 Every young boy wants a dog, right? My brother wanted a dog and we got one. My mother chose a Shetland Sheepdog (Sheltie) and his name. Called Reggie, he was adopted in 1974 just before I turned 2 years old. My mother took pictures of him for every birthday with a candle in a Gaines Burger. He was a well-trained dog; would take the Milk Bones out of your hand so gently when you told him “nicely”.

In his later years, we taught him how to shake, though I think we did most the actual shaking for him. The one trick we never taught him was Treif/Kosher; we had seen another dog do that and thought it was adorable.

Reggie hated car rides because they always meant either the vet or the kennel when we went on vacations. My mom finally learned how to drive just before we moved when I was in fifth grade. We bought the house and spent a lot of time working on it before moving, so Mom would drive over and take Reggie along. Slowly he learned that the car also meant “that other house”.

When he was finally too sick, he was put to sleep on the third day of Passover in 1983, not long after we moved, and was buried by the side of the house. 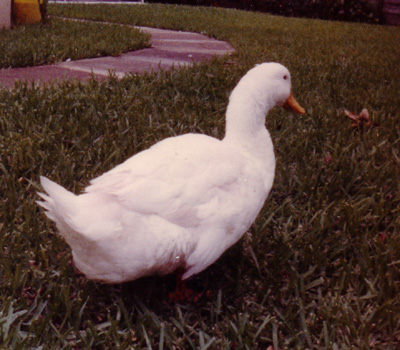 We lived not too far from Oak Grove Park. One day, a duck came waddling down the street and ended up at a neighbor’s house. That neighbor, Fred, called my brother over and said, “Do you want a duck?” And thus, we adopted Webbey around 1978. Webbey and I didn’t always get along so well. He liked to nip at me, especially when swimming, like he was trying to save me from drowning.

One time, we brought him back to the park to be with his other duck friends, but he didn’t get along with them, so we took him back. He died while we were away at summer camp and was buried next to the house. (The first house; he didn’t make it to the second one.) 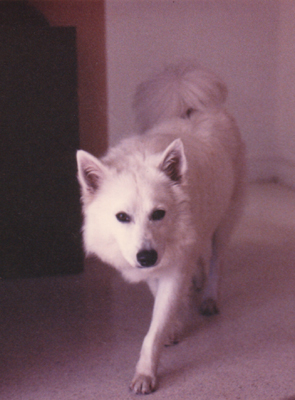 He wasn’t with us long, but during high school, someone abandoned Skipper in our neighborhood. He walked up to my brother on the front porch and we took him in for about nine weeks until we found another family to adopt him. Skipper was a sweet dog and well trained, likely a pure-bred American Eskimo. We found it hard to believe someone would just abandon him, assuming it was someone who moved into a condo that didn’t allow pets. Surely there must have been some way to find the dog a good home.

Skipper didn’t walk, he pranced. My parents had to ride a bike to take him for a walk; I just ran with him. I wanted to keep him, but he went to a family with a couple of younger kids.