This blog post is overdue to the point where it is probably going to be very long. I purchased my gTablet several months ago and this could probably have been a series of blog posts if I’d been keeping up my blog. I may yet have follow-ups.

I’d been wanting a more portable computer, smaller and lighter, like a tablet or a netbook. After seeing an old TED talk showing a multi touch screen (from before they were released), I knew I needed one.

Woot put the ViewSonic gTablet on sale for under $300. That beats an iPad for price, it works with Flash, and it’s the Android OS. I was worried they would sell out and I jumped on it. They sold over 10,000. It turns out that Amazon was just opening up an Android app store, and Amazon had not too long ago bought woot. Coincidence? You decide. (Woot has since sold the gTablet twice more. Keep watching and they’ll probably do it again.)

When I first started it up, things went a little wrong. The pre-installed apps didn’t work and everything crashed. Restarting brought up the EULA and the set-up screens like it was supposed to do. And the apps worked.

First, I tested the battery by playing Angry Birds all day. I think it lasted about 10 hours like it was supposed to.

I decided to use the stock OS for a while, though most people insisted you had to root and mod it for it to be any good. There were a couple who said to just try using it as it was, so I did, although apparently I rooted and modded without knowing it (I just downloaded and installed as I was told) to get access to Google Market. Some would argue it’s called Android Market, but if Google has to approve the device (and the gTablet is not approved), then it’s not “Android” Market

For those who don’t understand the previous paragraph, rooting the device gives you superuser access to do extra things and modding it means replacing the stock OS (what it came with) with a modified version that someone else has programmed. Doing this usually voids your warranty.

Coming from Palm OS for at least a decade, I had some issues with Android. First, it syncs to Google (and other web sites) and not to my computer. I like having the local copy and not letting Google know everything about me. Some of the basic Palm apps were missing. The calendar kind of sucked, my contacts didn’t transfer without repeated errors, and there was no built-in memo or notepad app.

I found an app that converted my Palm calendar to Google, so at least there was that, but the Android only syncs to the last few months and forward, so I don’t have all the old stuff on the tablet. Amazon has a free paid app every day. Early on, they offered Business Calendar that beats the built-in one by miles.

One of my goals with the gTablet was to go paperless for genealogy work. I had tried with my Palm TX, but the screen was too small and my neatly listed record look-ups word wrapped. Looking for a good notepad, I read about Evernote and Springpad, opting for the latter first. Everything seemed to go well, until my updates on the gTab didn’t sync up to the web site, then the web site synced down and deleted all my new notes. It was a “known issue”. I searched carefully about Evernote and found mention of the same. So I switched to Dropbox and plain text files; it’s never let me down.

Also for work, I tried a few apps for timesheets; I settled for one but have a couple others I’m still trying. I also found a simple expense manager, which was something else I used periodically on Palm.

Once I got started, I can’t ever remember now what happened, but I bricked my gTab. Technically, I didn’t brick it, as that’s about 99% impossible to do with this particular device, so I’ve read. I was stuck in a boot loop. So I followed instructions to go back to the factory settings and started over, this time deliberately modding. When I went back to Google Market, it thought I was using a different device and my download options changed. Some apps I already had wouldn’t download, but I could get others. Amazon worked much better with the “new” tablet. Many other apps are also missing from my options because Google doesn’t think they’re compatible. I get them from Amazon or find them elsewhere when I really want them. I haven’t paid for an app yet. 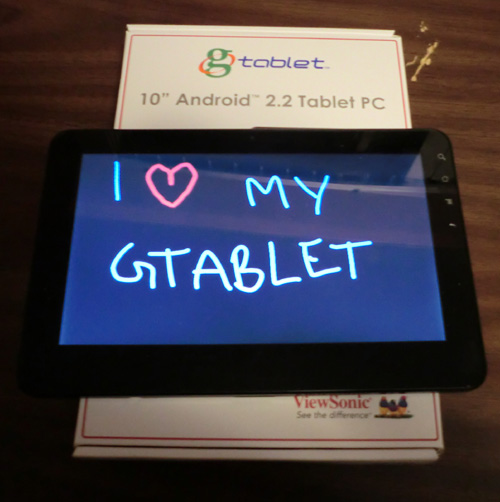 In the hopes of traveling with the gTab instead of the laptop, a keyboard was essential. While people fought over the iGo on eBay, I bought the Palm bluetooth keyboard. The Palm has the numeric row at the top which is handy for dates and FHL film numbers. It usually works well, but sometimes, I think when it’s idle a bit, it disconnects itself and doesn’t like to reconnect.

The gTablet has a microSD and a USB slot, so I can save data externally if I ever run out of memory; it has 16GB built-in. I haven’t loaded it up with music or video files, though I’ve tested both, so plenty more storage space is left. There’s no GPS or forward facing camera. Now that I’ve seen some of the apps, I understand why both are important. There are USB GPSes that I’ve read will work but I haven’t looked for them.

I am loving my gTablet, despite the setbacks and that I hate the contacts app that came with the mod. I haven’t lost any research notes since switching to Dropbox. I’ve got PDFs of things like genealogy word lists in Dropbox so I can access them at the FHL, where I used to bring them on paper. I have too many games (loving a version of Sudoku right now), but many I can “finish” and move on. The mod removed Angry Birds and I haven’t put it back, which has probably saved me from wasting a lot more time. Did I mention I love my gTablet?

2 thoughts on “I <3 My gTablet -or- Adventures of a New Android OS User, The gTablet”