Knowing that MyHeritage is only free for under 250 people, I never really tried the site because I know that my database has almost 3000 people in it. However, at the IAJGS conference, I visited their booth in the vendor room and uploaded my entire GEDCOM. I hadn’t realized that I could still upload my entire database for free; I think their chief genealogist was directly responsible for that working without problems.

Other reasons for avoiding the site included the fact that I already had my own self-programmed site, and a bad first impression with Family Tree Builder from over a year earlier. My GEDCOM import into that program had serious problems, and I also take issue with a program that hijacks my computer. It’s been a long time, but as I recall, it left a link on my desktop (though not the only program that has), installed a toolbar in all of my browsers (including the ones I don’t use), and changed my browser home page, all without warning or asking permission. I’ve read other reviews of the program, and apparently it does a lot more that people don’t like.

But this is a review of the web site. It doesn’t install to my computer, so I gave it a try. I’d been meaning to do this for a while since I earlier reviewed geni.com and was going to also manually enter my pedigree chart into this site just as I did that one. The GEDCOM upload made this part significantly easier.

I noticed that when I had people with multiple names that MyHeritage only found the first name. My GEDCOM file is not complete with all of the types of data in my database. I was planning to make some updates to the file and try to upload it again, but more on that later.

My SmartMatching was pushed up to the top of the queue by Daniel Horowitz and I soon received seven pages. The final two pages were all single person matches, and none appeared to actually be matches. Because I still had the free account, I could not remove them from the list. I also could not confirm any of the correct SmartMatches. The earlier pages were all collateral lines, cousins of cousins or cousins of spouses of cousins, so they didn’t find me any long-lost cousins like they were advertising to do at this particular conference. It did find a few matches with two cousins who had entered a bit of their family information, but both are already my friends on Facebook.

One of my SmartMatches, within a few days, confirmed that the five people were the same, but again, because I still had the free account, I still could not confirm them from my end. I can’t figure out why they push the SmartMatch technology when they don’t actually let you use it on the free account. It looked like I could contact the other people, at least to tell them why I didn’t confirm, but I didn’t try since they were all collateral lines. Eventually, a second person confirmed another family group as matches.

One thing I was really interested in trying was the facial recognition. My grandmother and her sisters all look very much alike around the same age and I have some pictures of some of them that I can’t identify. The photo upload was almost great. It showed me previews of the pictures and let me upload multiple photos at a time, but it would only do one folder at a time. I was using my newly organized folders, so each time I uploaded one or two photos, I had to click back around through two pages of the web site to get back to the upload page for another folder.

The photo tagging took a bit of time also. First, their site takes some time to analyze the photos and pick out the faces to be tagged. I hadn’t uploaded that much, but I had to wait for it. Then it took me searching around the site to find the pictures instead of the just marked faces. I need to see the entire pictures along with the file names, instead of just the faces because I can’t remember everyone who’s in every picture. I eventually finished tagging the people I knew and had just the mysteries remaining. The facial recognition had placed several faces together and suggested that they might be the same person. Unfortunately, for every mystery person, it gave me several options between the sisters and the wife of one brother. I was hoping it could figure out who were in the pictures more accurately. For one picture, it didn’t even give the option for the sister that I thought was in the picture.

I decided to try a large group picture containing many of the sisters around the same time period as the mystery photos. MyHeritage only identified that there were about half as many faces as there actually were. 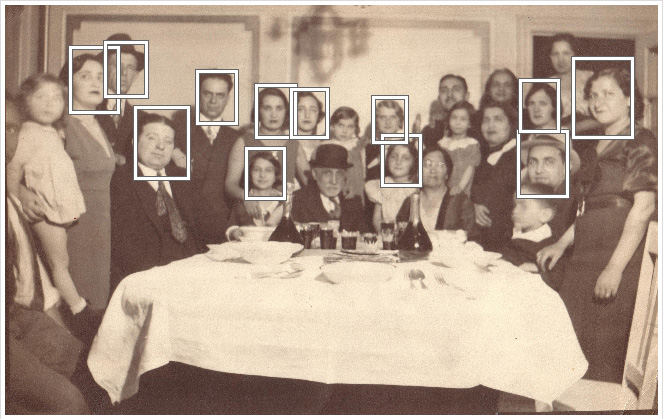 Yes, the picture is old and a little blurry, but I think it should have found more of the faces. I had to manually mark the rest of the faces and tag them all.

While I was hopeful that the site might be something great, I suppose I wasn’t so disappointed because I didn’t expect very much. I had already tried their celebrity matching application and didn’t agree with those results, so I couldn’t expect them to identify my similar-looking relatives very accurately either.

I did get a sneak preview of the future version of the site, without Flash, and the family tree page looked very nice. That was not scheduled to roll out for at least six months, if I remember correctly. Since this review has been sitting around for a while, it should be pretty soon.

While I was working on this review in August, I was also tweeting about it. One of the Twitter-using employees at MyHeritage offered me a Premium membership, which I gladly accepted. I wanted to try out more of the site, including confirming matches. Unfortunately, I still exceeded the allowable number of people in my database; I really needed the Premium Plus membership level. For a while, I didn’t get back to the site to try out any new features and finish this review.

Update: I don’t know what went wrong the day I had a whim to go back to the site to continue my review of it, but a couple days later when I logged in, I had the regular access again. So I’ll be doing a second review to continue.

Disclaimer: A few of the MyHeritage employees are good friends of mine. I think that may be why none of them offered me an upgrade and only one of their other employees would. As stated, the Premium upgrade was offered for free and unsolicited.