I should call this minus day one and not count it, but I am in Europe, so here goes.

This post will be filled with the nitty gritty details of my journey here. I haven’t really been anywhere yet, so skip it if you only want to know about seeing Europe and doing research. This one is kind of more about venting.

I didn’t sleep at all last night because I wasn’t close to being ready. I do that far too often actually when I fly somewhere. Driving, I just leave a little later. I still have things to do to plan for the trip I’m already on.

Amazingly, and to my own surprise, I was able to pack for a month in two carry-on bags. (I figured ten days of clothes was good.) I called for the shuttle and took a flight to JFK. I was three rows from the back of the plane and all the small children were back there. And yet, the flight was fine. The elder gentleman sitting next to me was friendly enough. And I guess most of the kid noise was drowned out by the engine noise. We even arrived a little early.

At JFK, it started going downhill. There was a shuttle to my terminal but there was no sign about it where there needed to be. I had about 30 minutes left of my two hour layover, after walking through the terminals, to check out the Delta Sky Club. I got some free passes for it a while back. The clerk let me in without keeping the pass since my time was so short, but they expire soon anyway so when else will I use them? (When arriving early to SLC, would be the appropriate in hindsight answer.) I was not impressed, then took the bus to the new terminal.

Because I pay attention to things, I saw the sign about one carry-on and checked it. The flight was very long. I dozed off many times but never got any real restful sleep. They served breakfast before landing but surprised me with dinner too, which I missed because I was half asleep. Exiting the plane, I saw a guy with three bags. I guess nobody enforced that sign much. I should have ignored it myself.

And then, I was in Europe. If I haven’t mentioned it enough, this is my first time off the American continent since I was 12, and that was the only time back then. After a walk through the airport, I got to customs and stepped into the shortest line, which moved at least eight times slower than all the others. And I’m not exaggerating about that. I now have an Amsterdam stamp in my shiny new passport.

My next flight boarded and it was less than two hours in the air. They gave us two sandwiches each. Seriously, US airlines are pathetic in comparison to the KLM service; the number of meals, drink service, the long flight even had warm towels for everyone multiple times just like I’d only seen in movies.

Warsaw is not a large airport. At least, it didn’t seem like it. After the bags went around and no more came out, there was a line at the missing baggage office, all from my flight. That’s right. I packed two carry-ons, checked one, and it didn’t make it to Poland with me. My first lost bag ever.

I was planning to use a bigger bag and check it, carefully packing a few clothing changes in the smaller bag, but once I realized I could go with two small ones, the second bag only held what it needed. I do have a few extra shirts, all my Androids and their chargers, my camera, and a few other things. Several hours ago, the KLM web site said they’d initiated delivery to me. It’s almost 4am. Are they waiting for sunrise? Not cool. Their Twitter person said someone would contact me. Then they said they would forward it in the morning. That had better be really, really early.

Now, about this hotel… It said it had a hotel shuttle when I booked it, which is why I came so far out from the airport. They changed the listing already. My taxi driver had trouble finding it even with a map. It also doesn’t mention the lack of air conditioning. Actually, I don’t see that listed for my next hotel either. It’s raining too, but not cooling off enough for me. That’s bad for sleep, but sleep is bad for this trip. I don’t have time for sleep or weekends.

What else went wrong on day one? My bluetooth keyboard refuses to pair with all of my Androids suddenly. I brought all my charger cables, but only one for two devices, and it’s the two I use the most. They’ll just have to take turns. I only brought my USB cables and not all the plugs, but one device actually needs its own plug and won’t charge. I haven’t eaten and I got hungry around 11pm in the middle of nowhere. Breakfast is in 4 hours. I still need a SIM card for my phone.

(Future note: take the plug for the biggest device. And do some doggone testing first.)

I think I’ll just kind of start over tomorrow. After breakfast, I will take the train to the city center and get started on my plans. I just booked my next hotel but not the rental car.

Also, when I got to the Warsaw airport, I followed the signs to customs and thought I took a wrong turn when a door just opened with no guard. No customs here for me. No Poland stamp. Too much European cooperation. I stepped back and took a picture. Hey, it’s better than pictures of my planes. 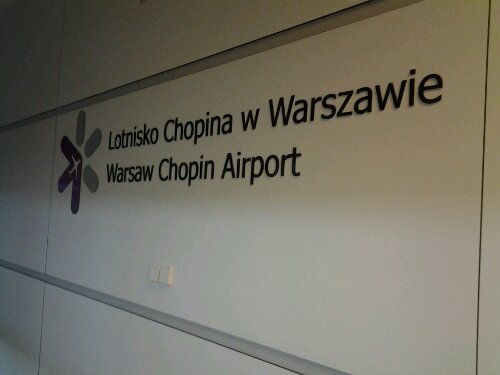 You may have also noticed that I’ve been trying to learn some Polish. I don’t know why I feel weird trying to speak to them. Maybe today. I eventually turned on the TV just to listen. So weird. US shows. Not captioned or dubbed how you might think. They play the original audio but a man overlaps it with a translation slightly louder.

Wait, I do have one other picture. I had a window seat only on the last flight. I took a picture of my view for most of that trip.

I didn’t have my camera ready as we approached for landing. Pretty. Lots of green and all orange roofs.

Gosh, that was a lot of venting, wasn’t it? I’ll balance that a little more.