I had some regular research to do today so I spent some time at the Family History Library. It was more crowded than usual. And the Internet cut out before it closed (an hour late for the conference). But the outage was bigger than just the building, so I heard on the way out.

Someone here for RT lent me a microUSB cable to copy my files to my Android, since I forgot my flash drive (again?!). And I helped someone else on the way out who had coincidentally visited this week and had a fabulous old photo album. I suggested she try to get a consult with Maureen Taylor at RT and did a bit of sleuthing on my cell phone to show here where to look for more info.

I still haven’t seen any of the Twitterers and bloggers that have been gathering together. I must keep missing them during meal breaks or something. Or I’m walking right past the ones I don’t know well enough to recognize.

A little follow-up on the RootsTech app. Things have changed since my review. The main icons have grown to number 16. I’ll skip the details. Updates are pretty constant. Hopefully they’ll get the unconferencing in there quickly so I don’t screw up and add something I want to go to on the wrong day again like I did last year. I will likely be using my phone this whole conference, since I’m expecting the same behavior as last year from the provided Internet. In that case, at least, I’ll be connected more often and get any updates in a more timely fashion.

The bad updates are when it tells me to download a new version, then takes me to my browser. I’m not logged in to Google Play in my browser and I have to go out and back through the app store app instead.

They activated some syncing between devices. I set my phone as device #1 and my 5″ as #2. My schedule was on #2. Two days moved to #1 and deleted from #2. Day three disappeared from both. Later, probably after some update, day three reappeared and the others vanished. Eventually it was all wiped out, so I had to go through it all again. I did it again on #2 and it appeared on #1. I didn’t double check everything, but it looks about right.

Exhibitors no longer looks bad with the one category and all are just listed. I’m pretty sure they changed the look of each exhibitor screen, and they removed the phone numbers entirely.

I arrived at my typical time to the FHL and got some work done. I didn’t see anything on Twitter, so I asked about crowds at registration. A couple of replies made me feel like I wouldn’t be stuck in long lines, so I went for a walk to the Salt Palace. A certain sign greeted me as I walked into the side door. 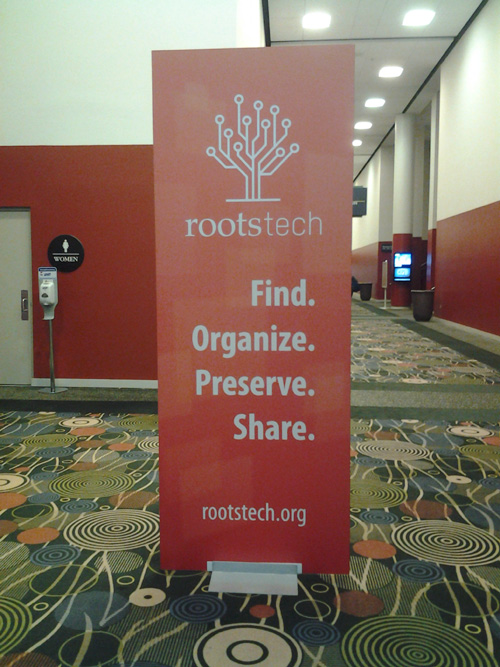 At least I knew I was in the right place. The registration line was nothing. I knew to stay away at first and I showed up about three hours after they began.

Jeanette Rosenberg (our Tuesday night UJGS speaker) and Mark Nicholls were hanging around so I said hello to them, then headed to the Exhibitor Hall. I was kind of expecting more security but I just walked right in, but not before being greeted by a certain sign. 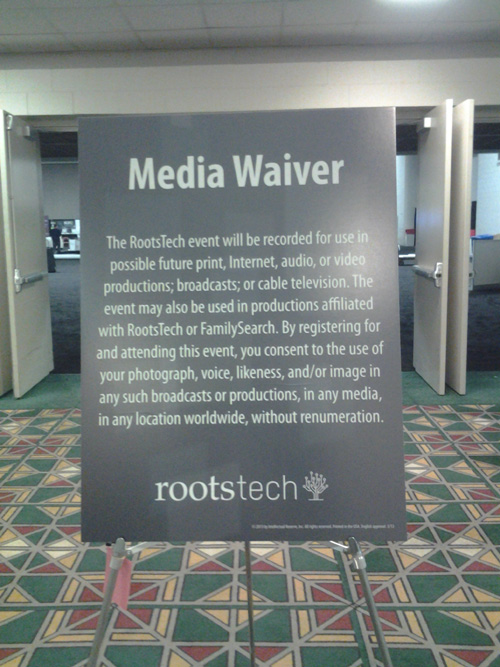 The previous registration picture, I posted on Twitter, to which I got a fabulous reply from Alex Coles, @wychwoodnz: “my eyes! #carpet”. I later realized it hasn’t changed since last year. Also, I prefer that wild one to this one.

You just scrolled back up to check out the carpet, didn’t you? :-)

In the Exhibitor Hall, it turned out that the person I was looking for was the first one I saw, and closest to the door, talking to someone. We walked back to the FHL, but not before I snapped a couple more pictures.

It appears that Unconferencing is already about half scheduled even before the conference begins. There are two boards, and the other is similarly filled.

I like the bag colors better this year than last. And the style of it too. I looked through the ads in it and found the card for the usual iPad giveaway, but with no mention of T-shirts. Did they skip them this year? I saw tweets about 6,800 registered attendees, not counting almost 2,000 children. Last year, they said they had limited shirts, fewer than the attendee numbers, and still had some left near the end.

The badges are a different type and smaller, so the usual ribbons do not fit properly. Daniel Horowitz already had a MyHeritage ribbon on his for me to see that.

I had some more nitpicking here, but I could write whole blog posts about those topics (and I’m sure I will), so I’ve deleted them and saved them for future articles. Thus, I’ll end here and see lots of genealogists tomorrow at RootsTech.