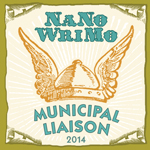 November is about to begin and that means National Novel Writing Month. I’ve participated in NaNoWriMo since 2003. In fact, I discovered the event just before moving to Utah and that was my first year. A few years later, I volunteered to be ML, Municipal Liaison, for Salt Lake City. So I’m not just participating, I’m also in charge of organizing for the area.

I win every year. My OCD requires it. Even when my story idea is a failure, I still somehow write 50,000 words in the month, which is the goal of NaNoWriMo.

A few years ago, I tried to make it a genealogy year. I didn’t have a story idea so I decided to get my genealogy books written. It didn’t go well. Yes, I wrote enough words, but I didn’t get the writing done that I wanted to do.

This year, my genealogy goal is different. I’ve already been working on it for a while, but I want to do more faster. I plan to get all of my genealogy organized. My own research always takes a back seat to client work, but it needs to get done. I have files sitting on my computer of records I found years ago that haven’t been added into my database. I still have records that I printed from microfilm that need to be digitized (I usually rescan from the film rather than scanning the paper). I was cleaning up my old sources and putting them into different formats and writing better source citations, and I never finished.

I’ve also fallen horribly behind with my family newsletters. The last couple of years, I’ve gone back and forth about doing one big issue or individual ones for each year. I’ve decided that I’m going to do individual ones, and I plan to get them done in November. Well, I usually take longer than that on a newsletter, so if I can get two of them done, I’m doing good.

I also have a more goofy idea that will hopefully turn into a few short stories, so I have something to do at the write-ins. I can’t really do the genealogy work at those; maybe a little, but not really.

I will have to measure my words differently since there won’t be quite as much typing in my organizing. Being a rebel for NaNoWriMo sometimes means setting a different goal and a unique word counter. Since I can type 85 wpm, that’s over 5,000 words an hour. I will count an uninterrupted hour of organizing work as 2,000 words. Any interruptions will make it count as 1,000. I think that’s fair.

With this word count, dedicating at least one hour per day should work out. I hope to go well over the 50k words by counting this way. At the same time, I still need to get client work done, show up to a lot of write-ins, take care of my house, and do whatever else comes along in a month.

My true goal is to get through all of the records on my computer. This often means doing more research as I’m going, so that takes up even more time. But then I’ll be ready for the next batch of research. I know there’s plenty more for me to do just from the FHL, but I’ve been putting it off with all of this stuff unfinished.

Anyone else writing for NaNoWriMo? I know a lot of other genealogists talk about it. Anyone else ever tried to do genealogy for the month?