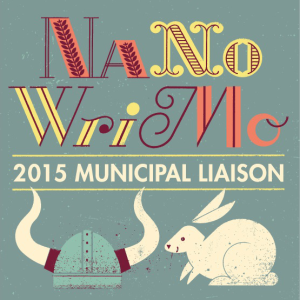 It’s about that time again. We had a kick-off party last Saturday, and this Saturday begins the month of November which is National Novel Writing Month.

I first discovered NaNoWriMo in October 2003, just before I was moving from Nashville to Salt Lake City. I drove into Utah on November 1st and I can’t remember if I actually began my first NaNo novel that day or a little later. I think that was the first year that NaNo had regions and it was for sure the first year of MLs (Municipal Liaisons). Four years later, I was ML for Salt Lake City, and some years later we renamed our region to Salt Lake County, which was more representative of the region.

The goal of NaNoWriMo is to write 50,000 words during the month of November. The original rules were to start writing something new, but they have slacked the rules. Most people still follow the original rule. And anyone is entitled to be a rebel.

The purpose of NaNoWriMo is to provide the motivation to get some writing done. You need a goal — 50,000 words — and a deadline — November 30th. Those two things make all the difference between writing a novel and doing nothing.

I have won every year, as my OCD requires, though several have been rebellion years. I have used NaNo for genealogy a few times. Last year and this past summer for Camp NaNo I did genealogy organizing. I had a lot of files sitting around that needed entering into my database and both were a huge success. An earlier year, I tried to get some genealogy writing done, but it didn’t go as well. I got 50k words written in every year, even if it wasn’t in the format I was expecting.

I’m still not sure what to do this year, so I’m leaving my options open. I have two ideas, but neither idea has a story yet that I can stretch to 50k words. I also have more genealogy to sort through, as always. I realized that I missed some things. So I’m going to give one story idea a chance first. If I have trouble, I might give the other a chance. And I am likely to put more genealogy organizing towards my word count again.

Let’s see what I can get done next month. What are your plans for November?