I initially watched this episode of Who Do You Think You Are? in a room full of genealogists at the Family History Library during RootsTech. It was fun to laugh out loud with the crowd in a few places. From a few other blogs about this episode, it sounded like there were quite a few people who had never heard of Tim McGraw, a country music artist. I was not one of them.

His Real Father and His Uncle

We started with the story of Tim’s father, how he discovered at age 11 that the man he thought was his father really wasn’t, and eventually reconciling with his real father.

Visiting his uncle, Hank McGraw, Tim began his journey. Hank asked him, “So dude, tell me, why do you want to get involved in something like this, digging up all the stuff from the past?” Tim’s first response was, “You scared of what we might find out?” Some people in families will ask the genealogist such questions, wondering why we want to know about our ancestry. Though Tim was joking, I think some people really are afraid of what a genealogist might find. Family secrets lurk behind every door.

Hank showed Tim some photos, though he was shown walking up to the house not carrying anything. Hank had a picture of his grandparents, Tim’s great-grandparents. Tim was excited to learn her name, Ella May Nave.

The Journey Began in Missouri

In Kansas City, Missouri, Tim met with genealogist Kathleen Brandt at the public library. Kathleen had Ella May’s death certificate. Tim was again excited to learn the names of her parents from that record. This is so normal for a genealogist when they finally find a record with the next bit of information. I prefer this part when it’s preceded by the search — just having the information handed over would take a lot of the fun out of it for me.

Tim joked with Kathleen when she pulled out the computer, then they searched Ancestry for the Chrisman family. In the voiceover, Tim explained how Kathleen was able to take his family tree back eight generations, while the screen showed the family tree chart. Again, the chart went straight back showing now spouses and no siblings, and giving no indication of the records that brought them so far back. Was it all found on Ancestry? Someone watching the show, who didn’t know any better, might believe that it was all found that easily. They might also think that the entire goal is to keep going straight back as far as you can. Sometimes you have to search sideways in order to go back, but there’s no indication of that on the show.

In the voiceover, Tim said he wanted to know more about Isaac Chrisman, the earliest person in his ancestry, and Kathleen had an old document to show him, dated 1772.

He thanked Kathleen with, “You set us in motion.” For someone who apparently took his family back eight generations, I’d say she did more than set him in motion. Many researchers can’t even go eight generations back, let alone further.

“It was pretty cool to go back so far so quickly into my lineage.” Too bad that only happens on TV shows where months of research was already completed by professionals. Couldn’t they have him mention something like that in the voiceovers?

Meeting with historian Stephen Aron, Tim showed what he already had and asked to know more about Isaac. This was mildly realistic, in that you have to share with a genealogist what you already know in order for them to continue the search. Stephen shared a few maps, and while they drove out to the location of Isaac’s land, the voiceover explained more of the history of the battle over land with the Indians. At the site, Stephen finally showed Tim a document he found that mentioned Isaac’s death.

In Richmond, at the Virginia Historical Society, historian Daniel Blake Smith shared more about the history of the time, and senior archivist E. Lee Shepard brought another document explaining the fate of Isaac.

Tim then said he wanted to go back further to find more about Isaac and where he came from. I don’t think they answered that question at all. Instead, Daniel showed him a “simplified family tree”. What exactly was this magical family tree and who compiled the information in it? Why did they not show him any genealogical documentation? What kind of research was done to compile this magic tree? I’m assuming they did some research. I think this was worse than when just tell the celebrity several generations of names without sources. This is almost like trying to show a source where there isn’t one.

Switching from Chrisman to Isaac’s mother’s family, his grandfather was Jost Hite and the show continued to research this individual in Tim’s ancestry.

In the Shenandoah Valley, historian Warren R. Hofstra explained more about the land orders Tim had just seen with Daniel.

To Washington, DC with Warren, they went to the Library of Congress. How late at night did he visit? It was dark outside and the reading room was empty; I’m betting it was after hours and opened just for the filming. Curator Julie Miller shared the journal of George Washington from 1748, when he visited the home of the Hites, and another mention by GW in a letter he wrote 20 years later.

“Have we answered all your questions?” asked Warren. “What I really want to know now, is I want to know where Jost came from,” Tim replied. Really, he wants to know more? His ancestor was just mentioned by George Washington, one of his idols, but that wasn’t enough? Of course, Warren already had a document, a subsistence list showing the names of people indebted to the English government.

Warren sent him to New York to find more. At the New York Public Library, Tim showed that subsistence list to historian Philip Otterness, who had another subsistence list from an earlier date, with a description at the top explaining what the list was.

Tim hadn’t suspected any German ancestry, but why? I don’t think he knew anything about his ancestry on his father’s side, so why would he or would he not suspect anything? Philip explained more about the history of those Germans who traveled to the US, including that Elvis Pressley’s ancestor was also on the same boat.

Tim returned home to tell his uncle what he found. Tim had previously compared himself to Jost Hite, and Hank did the same at the end of the episode.

I liked seeing the excitement from Tim upon learning the names and information about some of his ancestors, but I started to think about all the ancestors he didn’t learn about. How interested was he in learning more about the ones whose lives didn’t seem significant enough for TV? Why was he satisfied with knowing about his German-born ancestor and not tracing back even further in the family, when he kept asking to go back further the entire episode?

This also made me wonder about how much the celebrities are coached on what to say when the camera is filming. Many of their questions are added later in voiceovers, but some are asked during the filming. Obviously, the director/producer/whoever wants them to lead into the next documents that the genealogists have already found.

There were a lot of historians in this episode, and fewer genealogists. It felt more like a history lesson, which is not a bad thing. Just like last week, this one went far back into US history where I have never had to research yet, so those details need to be filled in. As usual, it was lacking in many of the genealogy details.

I arrived home after the second night of RootsTech to find a FedEx envelope stuck halfway under my front door. I found the label so interesting, I brought it to RootsTech the next day to share with my friends and fellow geneabloggers. I even had permission from someone at Ancestry to post it — not that I needed permission, but I still had it. 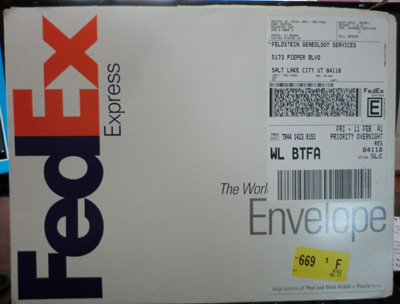 Can you see it even in that one? You can if you look closely. But here’s the label zoomed in. (At least one of the bloggers said I should crop out my address, but it’s in my footer…)

You noticed who that was sent from, right?

Daniel Horowitz arrived in Salt Lake City direct from Israel for RootsTech. I had previously convinced him to arrive a day earlier than he planned so that he could speak to UJGS on our already scheduled meeting date, instead of moving it for him.

We had a regular sized crowd for our meeting, with a few new faces, but not nearly as many as I’d hoped. I guess the Israeli research didn’t garner the same attention as Do Genealogy in your Sleep, a paraphrase of his previous topic.

Having seen the handout, I thought we were going to get a bit of a lesson in Hebrew, but he just went through a couple of PowerPoint screens of “101 ygolaeneG rof werbeH”.

Daniel reviewed several web sites on which we could find Jewish and Israeli records, not leaving out his own MyHeritage.com site. Then he went into the Israeli sites. Some had English on them but many were entirely in Hebrew. Using Steve Morse’s site to transliterate names into Hebrew — although his sample didn’t result in the Hebrew spelling he used for his own name — he showed us the results of several web sites for a search on his surname. Many of the sites were burial societies in Israel, called Chevra Kadisha. I had clicked on a few from his handout the day before, but even with his translation key, I had trouble finding some of the search pages. His presentation had big, red arrows pointing at the link for the search pages, making them easy to find.

It was possible that only two other people in the room were familiar with the Hebrew alphabet during the session, so the web sites were not entirely foreign to me. To others, they may have looked the way Chinese does to me.

While most of the crowd left before and during our business meeting afterwards, we discussed a few things, including starting a society blog. I can only hope that more of our members will contribute if we do that, to both the blog and the newsletter.

Having dinner afterwards with Daniel and Schelly Dardashti (of Tracing the Tribe) was a nice end to the evening.