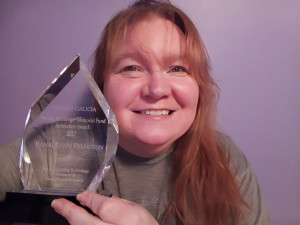 I have attended every RootsTech conference. For the past couple years, I’ve mostly spent my time in the Expo Hall at the IAJGS booth. This year’s RootsTech experience was quite different for me than all other years.

This year, I was a semifinalist in the Innovator Showdown for CSI: Crowd Sourced Indexing.

I spent much of Tuesday in Provo at BYU for the Family History Technology Workshop. It was my first time attending that one-day workshop and I spoke about CSI. That evening was the RootsTech Media Dinner. I’d never been invited before. The semifinalists were set up around the room to demonstrate our entries, but I didn’t feel like a lot of people were interested in that. We had some showdown rehearsal time afterwards.

The next morning, we started at 7am. I was joking about being up at the crack of dawn, but it was actually before dawn. And just for fun, I ended up on the red train and got my morning exercise, running around in the dark to get to the convention center. We received a schedule that morning which filled the entire day.

The semifinalist showdown was at noon. While it seemed like they were hyping it up to make us more nervous, I was only worried about going over my two minute time limit. I put my entire script right into the Powerpoint and just read it. If I started improvising, I always went well over the time. When I finished, I finally looked down at the clock and it was at 0:00. I have no idea how long I may have gone over, but judging by my practice runs, it was probably only seconds at most.

The finalists were to be officially announced at the party that night, but we had a secret meeting at 2:30. Where I previously had the entire afternoon full, I was suddenly free, as I was not chosen as a finalist. It was good that I had another booth to help with to get me out of the convention center; I only had to deal with a couple people who asked me what was next for the showdown, when I knew it was already over for me.

I spent the next three days at my table in the Innovator’s Alley talking about CSI. I had a lot of comments from people saying I should have been in the finals. I agreed with them. :-) Many asked about the program and if it could do certain things. I already had a lot in mind to add to the program and they gave me so many more ideas.

I went to the showdown finals but just long enough to vote for the People’s Choice. I heard who won a little later. I think it says something when the People’s Choice did not win any other prize. The people and the judges were not judging by the same rules. The questions from most of the judges were about business structures and money, and some really basic things about the genealogy industry that they didn’t understand, but the contest is called Innovator’s Showdown. I think FamilySearch needs more genealogists among the judges and fewer random entrepreneurs who know nothing about what is innovative in genealogy.

I enjoyed the evening events, the Wednesday night party, the Thursday night music event at the Conference Center, the MyHeritage party Friday night, and the blogger dinner hosted by DearMyrtle to finish off the week on Saturday.

All in all, even though I didn’t win, it was a good experience. I got some good exposure for CSI and a lot of people are interested in using it. That said, I have a lot of programming to do. 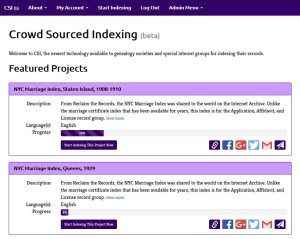 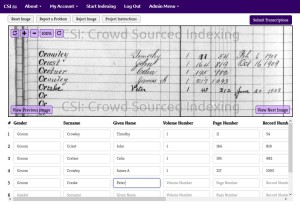