This was the first year I had ever tried to make latkes. I found a couple recipes in my possession. I think the first one I made was found online. The second was Mom’s recipe, which I’ve included below.

For the uninitiated, latkes is potato pancakes, a traditional Hanukkah food.

In true Jewish cooking style, I didn’t measure the majority of my ingredients. One video online said 5 parts potato to 2 parts onion. The recipe said 2 cups of grated potato and 2 tablespoons of grated onion. How much is 2 cups grated? I have no idea. I chopped an onion in half and peeled three potatoes, though one was giant sized. (Peeling was not mentioned in the recipe, but they were peeled in the video, so I added that part.) I then grated about one quarter of the onion and the potatoes. I added the rest of the ingredients and mixed it with my hands. 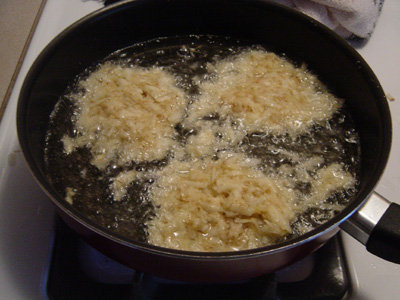 Pouring a probably inadequate amount of oil into the largest pan I had, I heated it, slopped in some pancake batter, and cooked them. The oil wasn’t hot enough to begin with, since the first ones took far too long. But I turned up the heat and finished off the pile of grated mush, placing them on paper towels to soak up some of the oil before eating.

They looked and tasted great. I think the middles were a little less cooked than they probably should have been. I think the oil needed to be hotter. Even when I was tweeting about it and went back to find them a bit overcooked, they still weren’t cooked through quite enough.

There was just one hitch. I didn’t have applesauce. By the time I bought some, I had finished the latkes. So I had to make another batch, at which time I found my Mom’s recipe. (I thought the first one was hers, but apparently not.)

I used an ultra-condensed version of what she sent to me while I was cooking, but I’ve included the full recipe in this posting. The one alteration I made: instead of grating the potatoes first and putting them separate, I grated the onions first. (And I flipped the 1/2 and 1/4 measurements when I transcribed it, but it still worked.)

For the second batch, I used most of the remaining 1/2 of onion, I did not peel the potatoes, I used more oil in the pan, and made the oil hotter, which made it splatter. However, they cooked more thoroughly through the middles. I had no matzo meal, so I used bread crumbs instead. And this time I ate them with applesauce. Yum.

1. Grate potatoes and place in a 4 cup measuring cup.
2. Grate the onion, add to measuring bowl.
3. Mix all ingredients together.
4. In a frying pan, heat up oil to almost cover the bottom.
5. Place heaping tablespoons of the mixture and flatten them down a bit.
6. When the edges are golden brown, carefully turn them over using a fork and spatula.
7. Remove to a plate with paper towel to absorb oil.
8. Makes about 14 latkes.
9. Serve with applesauce.